During his teens, Lynn Blakeston heard the sound which was to shape his musical taste. It was the vocal harmonies of The Byrds – the American band who drew on country and rock music  “Those harmonies switched me on to that type of music,” said Lynn, who runs The Gig Shop in Hull’s Beverley Road. The musician – who plays instruments including the pedal-steel guitar and the banjo – continues to explore that passion through Mean Eyed Cat. This five-strong country rock band, featuring musicians from East Yorkshire and North Lincolnshire, is one which has four-part harmonies at its heart.The band  has a repertoire which includes songs by The Eagles and Crosby, Stills And Nash. They also put their own spin on tracks by The Rolling Stones and The Beatles – including Honky Tonk Women and I Feel Fine – which are given a country and bluegrass makeover. “We really need a listening audience for the harmonies,” said Lynn. “If you are in a noisy pub, they don’t really get it.”   Mean Eyed Cat – named after a bar in Austin, Texas, the home of American music – was formed three years ago, after Lynn bumped into fellow musician Robert Nicklas. Lynn and Robert – who sings lead vocals and plays the acoustic guitar and mandolin – were joined by Anita Sykes, whose instruments include the piano, violin and accordion.  WhileLynn began playing the pedal-steel guitar 33 years ago – after seeing a concert by the American country rockers Poco – he says it continues to offer challenges.Five years ago he switched to a double-necked version of the instrument – which lies flat on a table and uses foot pedals and knee levers to change the pitch.”If I live to 150, I will just about have sorted it out,” he said. “It’s the only instrument in the world that you need both feet, both knees and both hands to play.” Tonight is a tremendous opportunity to see the band in all their glory on the Shire Hall stage, a concert not to be missed, especially at this price! 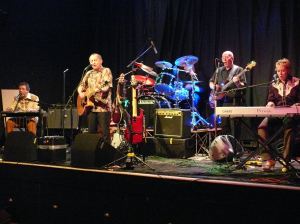